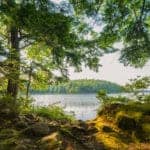 The Medway Community Forest Cooperative in Nova Scotia is advancing work on a campground located on lands it manages, a report said.

Late last year, plans for a 12-site camping area near Stave Lake, Annapolis County, were revealed. A Request for Proposals was issued in March.

The campground is situated near the Tobeatic Wilderness Area, and across from Kejimkujik National Park.

The report mentioned Jennika Hunsinger, Ecological Forestry Coordinator at the cooperative who admitted “We are working hard to make it happen. It’s been slow,”

Staff have started to walk the landscapes and map trails, and are beginning to see how they can be made real.

In the report, Hunsinger stated that there are only a few steps left to get the shovels in the ground. He also noted that Hurricane Dorian cleanup has caused some delays.

The MCFC, a Crown land licensee, manages 15,000 hectares. This includes land previously owned by the Bowater Mersey Company in Annapolis County near Annapolis Royal. Caledonia is the home of the MCFC’s headquarters.

MCFC hopes to secure funding for the campground project and will work through any other obstacles over the next few days. The fall and winter will be used to build the infrastructure, parking lots, and trails, with the goal of opening the campground for campers next summer.

Hunsinger stated that Kejimkujik can be very busy in a normal year. “This will be great to provide additional accommodation for people.”

It will allow users to experience backcountry camping, and there will be sites along groomed trails. Accessible sites for those in wheelchairs and people with strollers will be located close to the parking lot, but far enough away to provide privacy, the report added.