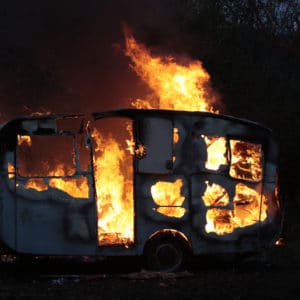 Oliver’s fire chief gave some insight into the heartbreaking decision he had to make during the initial stages of the fight against the Nk’Mip creek wildfire, a report said.

The fire that spanned 20,000 hectares was still uncontrolled as of Wednesday afternoon. It was lit up in the afternoon of July 19, near Nk’Mip Road, in the hills east of Osoyoos.

Graham continued, “There was an area off Nk’Mip Road that contained several RV homes. Some of these were destroyed by fire.”

“We had no choice but to risk-manage the area in which the fire was rapidly approaching, and we were unable to save the structures or our personnel. It was difficult to escape, and not an enjoyable decision.”

The chief stated that Nk’Mip Road was safe from immediate danger and his team was dispatched to protect 10 structures on an eight-kilometer McKinney Road section.

The department was called back to assist with structure protection for the Nk’Mip creek fire and dispatched a crew of firefighters to aid with the huge White Rock Lake fire near Vernon.

Mayor Martin Johansen stated, “You guys have done a great job and given everyone a reason to feel proud of you. They didn’t need any other reason. But the feelings and goodwill towards fire department just grow every day.”

Officials have confirmed that only one home was destroyed by the Nk’Mip Creek wildfire in Shrike Hill.

According to the BC Wildfire Service, the fire has slowed down significantly and was described as “stalled” with little or no growth in an update published Wednesday.

Crews and the Incident Management Team are currently working together to determine the best containment options for the northeast. Crews continue to clean up any other edges.

Planned ignitions will also be used to strengthen containment lines.

The northeast flank is close to Mount Baldy. Monday’s alert was downgraded to an evacuation order for 123 properties.

Around 2,300 properties were placed under emergency alert or evacuation order at the peak of the emergency, in late July. The area covered approximately 35 km from Highway 97 east and Highway 33, and approximately 20 kilometers from Oliver south towards the Canada-U.S border.